Why a Polarizing filter should be in your go bag.

In making the last featured meal, I had taken a shot of our rice cooker, positioned to the side of our sink which is in front of a window.

Immediately notice that between the two samples, the photo taken with a polarizing filter has much reduced reflections and glare from the rice cooker’s glass lid and from our granite counter-top.  Color saturation is also increased on the right photo.

Polarizing filters earn their keep in a camera bag, for indoor and outdoor shots.

For almost as long as I’ve owned the workhorse lens (which was also my first owned lens), I’ve had a Hoya 58mm circular polarizing filter as a ride-along. 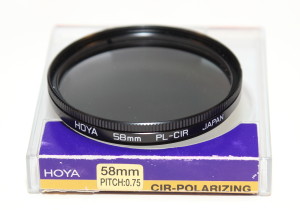 I obtained the polarizing filter above in 2006 from a local mom-and-pop photography shop which, like a lot of other brick-and-mortar retail camera shops, are no longer.  Based on what I paid for it (~$50, incl. shop markup and the have-it-now premium), I think the closest equivalent make today is the Hoya alpha Circular Polarizer Filter[*]

If  you’re interested in a brief science of how polarizing filters work, find this wiki.  Basically, light that is reflected from non-metallic surfaces (e.g. glass, water) becomes polarized, and the polarized filter rotated to only pass light perpendicular to the reflected light will absorb much of the reflected light.

In practice, a polarizing filter has its greatest effect when used to take a picture 90° from the sun.  (around noon or early afternoon, depending on geographical location). 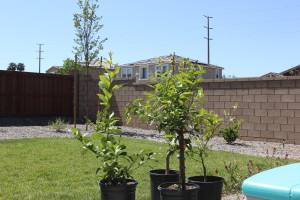 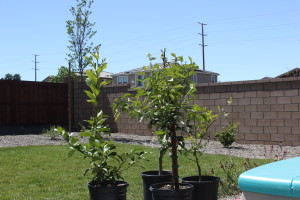 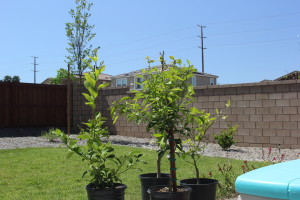 In the samples above, just adding the polarizing filter at minimum effect increased contrast and saturation of the concrete fence and fruit trees.  Rotating the filter’s front element to maximum effect makes a bluer sky.

While we were at a park recently, I was able to capture these differences between min and max polarizing effect: 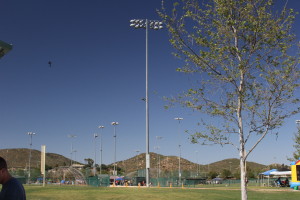 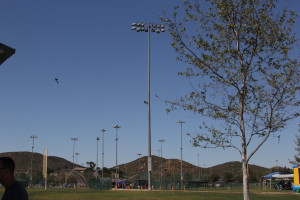 The park shots were taken later in an afternoon day than from the noon-ish shots of our back yard.  Here, the polarizing filter at maximum really changed the skyline, and significantly lightened up the mountains and grassy terrain.  The baseball fences stand out more in the max polarized shot.

When properly used, a polarizing filter can get you some really awesome photos out of the camera with effects that can’t really be simulated in software post-process.

are available for what appears to be a comprehensive range of common lens filter diameters.  To find out which filter size you need for your lens, you can look up the filter diameter specification for your lens.  This may be found in the product documentation, or often its labeled on the lens itself: 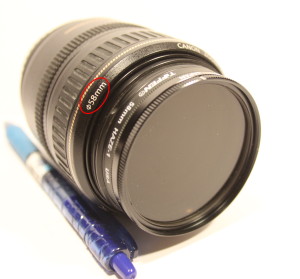 Look for a millimeter (mm) label that’s prefixed with a slashed-zero (∅).  In the example above: ∅58mm.

If your current camera of choice is a kind that uses a fixed lens and/or just doesn’t have a native filter thread, see if your camera model has a filter attachment accessory available.  Or, use a little finessing: 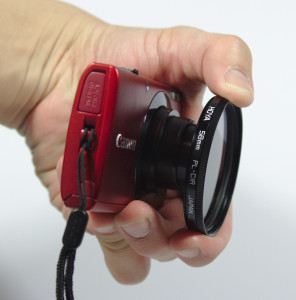 [*] Product links included on this page lead to external merchant site(s) in which this site participates in a link referral program.  Clicking through these links and purchasing referenced products or other products sold by the merchant helps this site.  More information may be found on our “Support Us!” page.

This entry was posted in Basics, Filters, Information. Bookmark the permalink.

One Response to Why a Polarizing filter should be in your go bag.