ChromeOS – the one that opens the door for many?

After food and shelter needs have been met, access to computing resources is quite the requiem for participation in today’s economy. Fortunately, access is continuing to be more affordable.

A frugal colleague and friend raves about his Chromebook, and the recent announcement of Android apps getting a play in ChromeOS (no matter how practical or not) got me looking into an actual Chromebook myself.

However, I am cheap and have other short-term priorities for the couple hundred USD. Meanwhile, here’s trying out Neverware’s CloudReady ChromeOS on my already-owned workstation laptop via VirtualBox.

But wait. There’s a shell! And Crouton is available as a download, that sets up a chroot environment and a FULL Linux desktop! Things that run on Linux, like GIMP, LibreOffice, Firefox, and Steam (yes…we’re potentially pushing hardware limits here) are available. 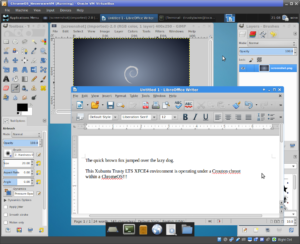 It’d be tight, but you could run Eclipse, Android-Studio, MPLABx, or TI CCS for those software engineering projects.

Want to burn more CPU cycles? I run VirtualBox on Linux. I haven’t tried it yet, but there is a Crouton instruction page for setting up VirtualBox. As seen on a couple Youtube Videos, this means a configured Chromebook can run Linux, when then can run VirtualBox to run ….Windows. (Legally, buy a Windows License)

The value preposition here is that a Samsung Chromebook 3 11.6″ 4GB RAM Chromebook can be had for about $230, that gets you an ultra portable fanless Intel Celeron N3050 dual-core laptop with a 1366×768 screen that claims it can run 11 hrs unplugged. Hardware specs that are in-line with other laptops in the $300-$500 range, but those others tend to have weaker battery life. Screens may be larger but resolution is the same.

We live in an amazing time in our place, where a little over $200 gets you a decently built small laptop that brings you email, voice/video communication, research, networking, and document processing, which connects via WiFi at home or public free sites like libraries and coffee shops, or a cell phone’s hotspot.

For what I probably paid for just a CPU a decade ago, is now the entry point for a NEW complete system that likely fits the needs for 75%+ of the computing user base. No matter how much of that 11hrs battery life is real, it’s still way better than the *almost* 2hrs battery life I’ve gotten with black-friday special stripped laptops.

This entry was posted in computers, Information, thrift. Bookmark the permalink.

One Response to ChromeOS – the one that opens the door for many?